UD #41 CHROMATIC Wrap-up: Applying the CHROMATIC SCALE
Ukulele in the Dark with Guido Heistek
Use the chromatic scale to:
CREATE SCALES, MOVE CHORDS UP THE NECK, LEARN THE FRETBOARD AND MORE!
I ended off my last news letter with a list of uses for the chromatic scale. Here is a little expansion on each point and answers to the questions associated with each point.
(Please check out last week’s newsletter if you haven’t read it: https://ukuleleinthedark.com/ud-40-chromatic-walk-in-the-park/)
1. Movable chord shapes
Question: How many frets up the neck do I need to move a C chord for it to become an F chord?
Thus far we have looked at using the ROOT NOTE POSITION in the chord shape to tell us how to name chords up the neck.We can also use our knowledge of the CHROMATIC SCALE to find and name chords up the neck.

OUR GOAL: To move an open C chord up the neck so that it becomes an F chord.

How many frets do we need to move it?

The answer is in the CHROMATIC SCALE.

First let’s go through the chromatic scale from C to F:

This tells me I need to move the shape 5 frets up the neck.

Here’s another way of looking at it:

If we move the C chord shape up the neck one fret at a time we eventually get to an F chord.

Here is a C chord:

If we move it up one fret we get a C# chord: 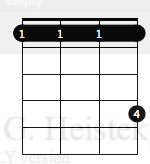 Move it up one more fret and you get a D chord:

If we continue this way and move the shape up the neck one fret at a time, we eventually get to an F chord:

Move a C chord up the neck 5 frets and it becomes an F chord! 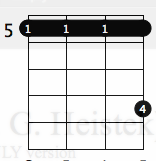 (Note: THE NUMBER 5 in this diagram is telling use to bar at the 5th fret)

Here is the whole process in tab. Hope this makes sense!

TRY THIS ONE: How many frets up the neck do you need to move an open A chord in order for it to become a D chord? Answer at the bottom of the page.

2. Scales
Question: What are the notes in an E major scale?

We began our walking exploration of the CHROMATIC SCALE last newsletter by walking the C major scale.

You may have noticed the notes laid out in a certain pattern:

This pattern can also be seen when we play a major scale up one string.

Take the C major scale which we learned to play up one string in UD #37:

In terms of the chromatic scale 2 FRETS equals a WHOLE STEP
and 1 FRET equals a HALF STEP. So you can see the pattern is the same!

All major scales follow this same pattern in the spacing of the notes!

All you need to do to create a major scale is to start on a note and follow the pattern.

Let me show you have that works:

Here is the chromatic scale C to C.

Our goal is to create an E major scale, so we start on an E note. Oh Oh, if we start on the E note we’ll run out of space.

So, here is the chromatic scale in a circle so you can never run out of space: 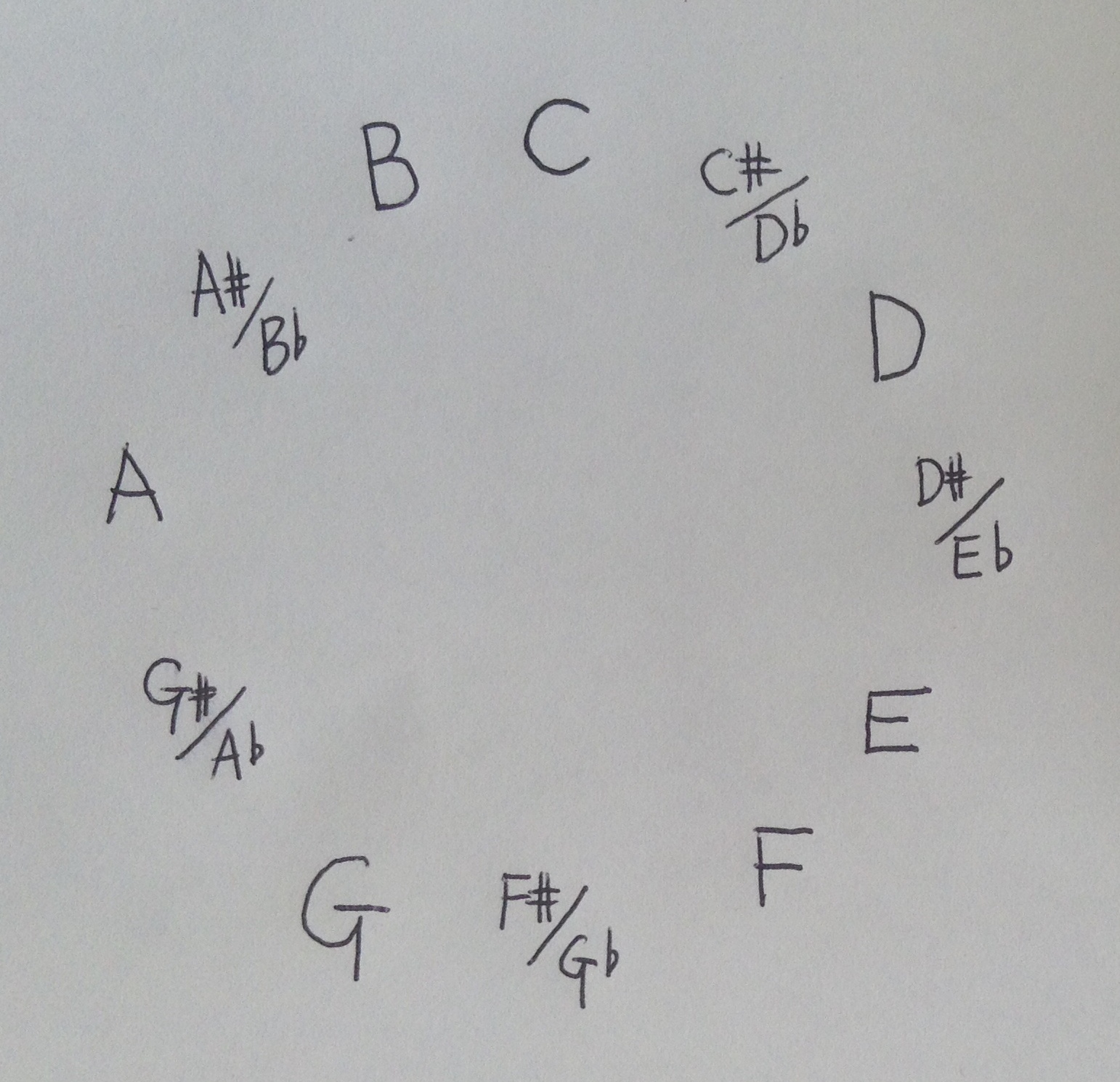 (Note that the diagram above also shows you your options in terms of naming a note with a sharp or flat. The note between C and D can be called C# or Db.)

And so we have the notes in an E major scale:

How do I know whether to use # or b to name the notes in a scale?

Let’s do another scale: F major!

The idea is that if you develop a strong sense for the chromatic scale that you can build scales in your head as you need them. Try it next time you are on a long bus or plane ride!

As we learned in UD #17, the chords in a certain key are built off the notes of the scale. The fourth note in an F major scale is a Bb. So the IV chord is Bb, too. Cool eh?

4. Learning the fretboard of your ukulele.
Question: What note is on the 4th fret of the E string?

This is very similar to question 2. We just go up the E string and use our knowledge of the chromatic scale to guide us. E is open, first fret is F, second fret is F#, 3rd fret is G, 4th fret is G#. Answer: The 4th fret of the E string is G# (or Ab). So if you know the chromatic scale you can always extrapolate on the notes that you do know on the fretboard. Once you know one of the notes on a string you can figure out what the other ones are. Nifty eh?

Hope that makes sense. I will see you next newsletter!