UD#45: What do the SEVENS mean? (The Numbers in Chord Names)
from Ukulele in the Dark
w/ Guido Heistek

EVER WONDER what the numbers in chord names mean? C7, F6, A7…

A student asked me an interesting question in class the other day:

“What makes jazz different from other types of music?”

This is a very tough question to answer but one potential answer did pop into mind:

A seventh chord is a kind of four note chord.

As we learned in https://ukuleleinthedark.com/ud-13-ukulele-music-theory-abacus-ii
chords are built from scales.

If we take the 1st, 3rd and 5th note in a major scale we get a major chord. In the key of C this gives us C, E and G (the three notes in a C major chord). We call this kind of chord a triad because it has three notes. To play the three notes of this chord across the four strings of the ukulele we have to double one of the notes: 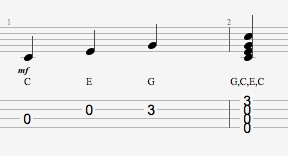 BONUS INFO: The “recipe” (thank you Andrew Smith) for making a major chord can be written simply like this: 1, 3, 5.

If we take the 1st, 3rd, 5th and 7th notes in a major scale we get a major 7th chord (ex. Cmaj7).  In the key of C this gives us four notes: C, E, G and B (1st, 3rd, 5th and 7th notes in the C major scale). We call it a seventh chord because we have added the 7th note in the scale (B), which is also the note that makes the chord a 4-note chord, and also gives the chord it’s distinctive sound. Let’s make a Cmaj7 chord:

ABOVE: The four notes of the Cmaj7 chord, followed by the four notes in the chord arranged across the 4 strings.

“How is a Cmaj7 different from a C7 chord? Aren’t they the same?”

No, a C7 is a little different from a Cmaj7.

ABOVE: C7 one note at a time, followed by across all four strings.

“What about minor 7th chords?”

ABOVE: Cm7 one note at a time, followed by across all four strings.

ABOVE: Cm7b5 one note at a time, followed by across all four strings.

If you are interested in more study along these lines please take a look at these links on Chord Spelling:

Okay, hope you’ve enjoyed this week’s newsletter! All the best,

p.s. Here are all the recipes again. Plus a few more: