Soloing is when a musician improvises their own melody along with the chords in a song. Imagine you are playing a song with a friend. If he/she strums the chords you might like to play along with some cool sounding improvised picking. That’s called “taking a solo.” Pop and Blues music often feature instrumental solos. In Jazz as well as Bluegrass music it is the tradition to sing or play the melody of a song and then the musicians take turns playing improvised solos. If that sounds like a good thing to learn to do, read on!

I have often heard my students say something like this:

“When I get a chance to play a solo, I don’t have any ideas. I fish around for notes to play and it all seems so random. How do I work on soloing?”

I studied jazz guitar in University and I remember my teacher  encouraging me to write solo ideas. He would get me to compose several musical lines that would work over certain chords or chord patterns. I remember him telling me that a lot of people feel that soloing should be spontaneous and improvised, but ironically we need to prepare for that!

Hey You Played That in your Last Solo!

Sometimes on Jazz CD releases we get to hear alternate versions of the songs as bonus tracks. Have you ever noticed that sometimes parts of the solos are the same in both versions? The player seems to have decided on how they will be begin a solo, or sometimes he/she has a predetermined ending to the solo.

I can remember a friend relating to me the experience of going to see the same jazz musician  two nights in a row. He was surprised that a lot of the solo material was the same in both shows.

All this to say that soloing or improvisation is not always improvised as we commonly think of it. It is often more like the spontaneous reorganization of familiar material. This means that the player needs to develop a repertoire of familiar material that he/she can draw from when soloing.

Let’s look at one approach for creating a solo idea to play on a C chord. Easy does it!

Most of us know the open C chord. For today’s lesson we are going to build a simple soloing idea using the C chord on the third fret. This one: 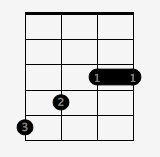 Let’s take three notes from this chord shape and see if we can build some soloing ideas with them. Here are the three notes we will me working with: E, C and G. These are the “chord notes” for a C chord.

Play the notes one at a time. Don’t worry if it doesn’t sound thrilling.

Let’s try something different. Arrange the chord notes in a different order and play them. Try G, C, E or C, E, G. It may seem pretty tough to create an interesting sounding musical idea with just these three notes. I feel the same way. SO! Let me show a few ways to spice it up.

CONCEPT #1: STARTING FROM A FRET BELOW

Here’s an idea that my jazz guitar teacher taught me. Instead of playing the chord note on its own, why not play the note one fret below the chord note and then play the chord note? This gives us a very cool scooping sound, a sense of tension and release. Please play this example to hear how it sounds:

That more like it! We start with the note one fret below E and then play the E note. We start with the note one fret below G and then the G note. Same process for the C note. Sounds a lot more interesting now! We can use this concept to come up with some interesting sounding ideas. Sometimes we can play the chord note directly and sometimes we can come at the chord note from a fret below. We can mix and match! Please play the following examples and then see if you can come up with some of your own.

CONCEPT #2: STARTING FROM 2 FRETS ABOVE

And here we use the same idea to get to the G note:

And here we start two frets above the C note and land on the C note:

Like before we can use this concept to create a whole wack of ideas using the notes of the C chord. We can go directly to the chord note or approach it from two frets above. Mix and match. Here are a few examples:

Oh! I think I like this one the best!

PUTTING THE TWO CONCEPTS TOGETHER:

You guessed it. We can create a whole lot of neat soloing ideas when we apply both concepts to the notes of the C chord. Here are some examples

Okay, this one is a winner. It sounds like something that Buddy Guy would play! Can you come up with some solo ideas of your own to play over a C chord? Give it a go!

Moving the Shapes Around!

Here is a little video reviewing today’s lesson and showing how we can move a pre-fab soloing idea up and down the neck. This way we can use the same shapes to play on different chords. Very exciting! I use one of today’s soloing ideas to play a solo through a blues progression. You’ll find tablature below.

That’s all for today. I hope you enjoyed today’s lesson. Have fun constructing solo ideas. I hope that this lesson cast some light on the process. If it seems like too much to digest, it might be! Take little bite at a time. Take a little piece of the lesson and make sure you understand it. It’s better to have a little clarity then a lot of confusion. Keep at it, and keep coming back to it as you understand more and more.

If you want to jam along with the backing track for the blues in C you can go here:

And finally here is the tab. Click the image to get a printable version: 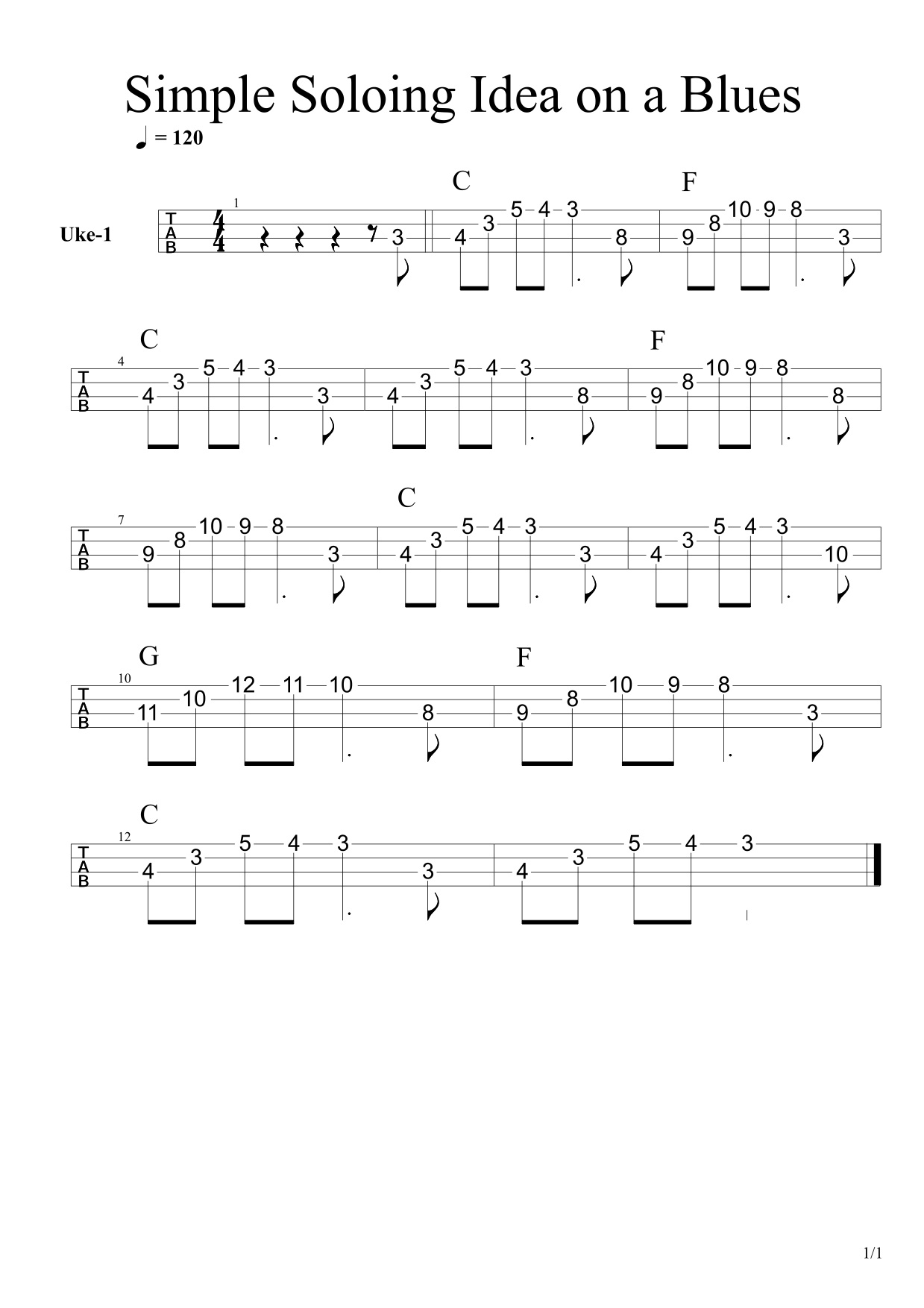 My friend and colleague Jim D’Ville came through town on his way to the Kamloops Ukulele festival. We got to talking about improvisation and soloing and he made a “3 Questions” interview about it. Thanks Jim! Today’s lesson uses some of the ideas from the interview. So, please give it a watch.

Also please check out Jim’s site. He is a brilliant man.