One of my students recently put a lot of work into playing without looking at his hands. The resulting change in his playing and confidence was just so startling that I really wanted to write about it in today’s newsletter.

We were in a lesson and I noticed just how much my student was “looming” over his fingers, trying to keep his eyes on everything that was going on. He was also having a really tough time getting the fingers of the left hand in the right place! He’d get the right fret but the wrong string, or accidentally fret two notes on the same string, and the chord would sound wrong. When this happened, he would become even more determined to see what he was doing with his hands.

I started to wonder if maybe his reliance on visual feedback was cutting him off from some information that he needed to place his fingers well. I know from my Alexander Technique work that the visual sense is very dominant and can override other senses like proprioception and the kinaesthetic sense.

I thought maybe he was relying too heavily on the visual, and wasn’t connected to where his fingers were in space and on the fret board. He wasn’t seeing with his fingers.

In a way, it’s like we treat our hands as if they actually aren’t our hands and we need to remote-control them like a puppeteer controlling a marionette.

Now, I know that the urge to keep close track visually of what our fingers are doing comes out of a very sincere desire not to make mistakes. Isn’t it ironic that relying too heavily on the visual would cut us off from some of the feedback that can help us play reliably? I was reluctant to suggest it, because it can be stressful to try new things, but I finally blurted it out:

“You know, I think you might need to practice playing without looking at your hands so much.”

To my surprise he said, “Sure.”

Giving It a Try…

We spent the rest of the hour practicing without looking at our hands, relying on the sense of touch. We discussed how each of the strings feels different. The A string is unique because it has no neighbouring string. Same with the G string. With a solid tactile reference for the A and G strings, it’s easy to find the C and E strings, too.

We played the open strings for a while and then started picking out some fretted notes. We can feel the nut of the ukulele, so we know where the first fret is on every string. As we move our fingers along the string it’s possible to feel the frets passing under our finger-tips, so we can figure out which fret we are on.

We played some simple scales and melodies without looking at the uke. Then we did some chords and chord progressions. It was a big challenge to not look! Especially, when he made a mistake. Trying to correct the mistakes without looking also led to many hilarious moments, where he just had to take a peek. Laughter in lessons in the best thing ever.

Two weeks later we had another lesson and I had forgotten all about what we had worked on (Oops!). We started working on some strumming with a metronome. It was about half-way through the lesson when I started to think, “Something is different about his playing. What is it?”

Suddenly, I remembered all the work that we had done the lesson before. I said, “Hey! You’re not looking at your hands so much!” He said, “Yup. I’ve been working on that. I think it’s really helped.”

No Law Against It…

One advantage of being less visual in our playing is that it enables us to be a little more upright when we play. The player stooped their instrument trying to see their fingers is a pretty common sight. Beginners and more experienced players alike seem to want to see their fingers from the front, so they can check whether they are in the right place.

I encourage my students to momentarily tilt their uke to face upwards if they want to take a brief look at where their fingers are. Better to tilt the uke than to stoop and strain. Also, when practicing, it can be helpful to use a mirror to monitor your finger positions.

It’s also possible to play with a combination of the tactile and visual. If we refuse to stoop over the instrument, we end up looking down at the uke from above. If we look at our left hand this way we are able to see whether our fingers are on the right frets (very helpful when making shifts up the neck) but we need to use our tactile sense to tell us which string our fingers are on .

The view from above… 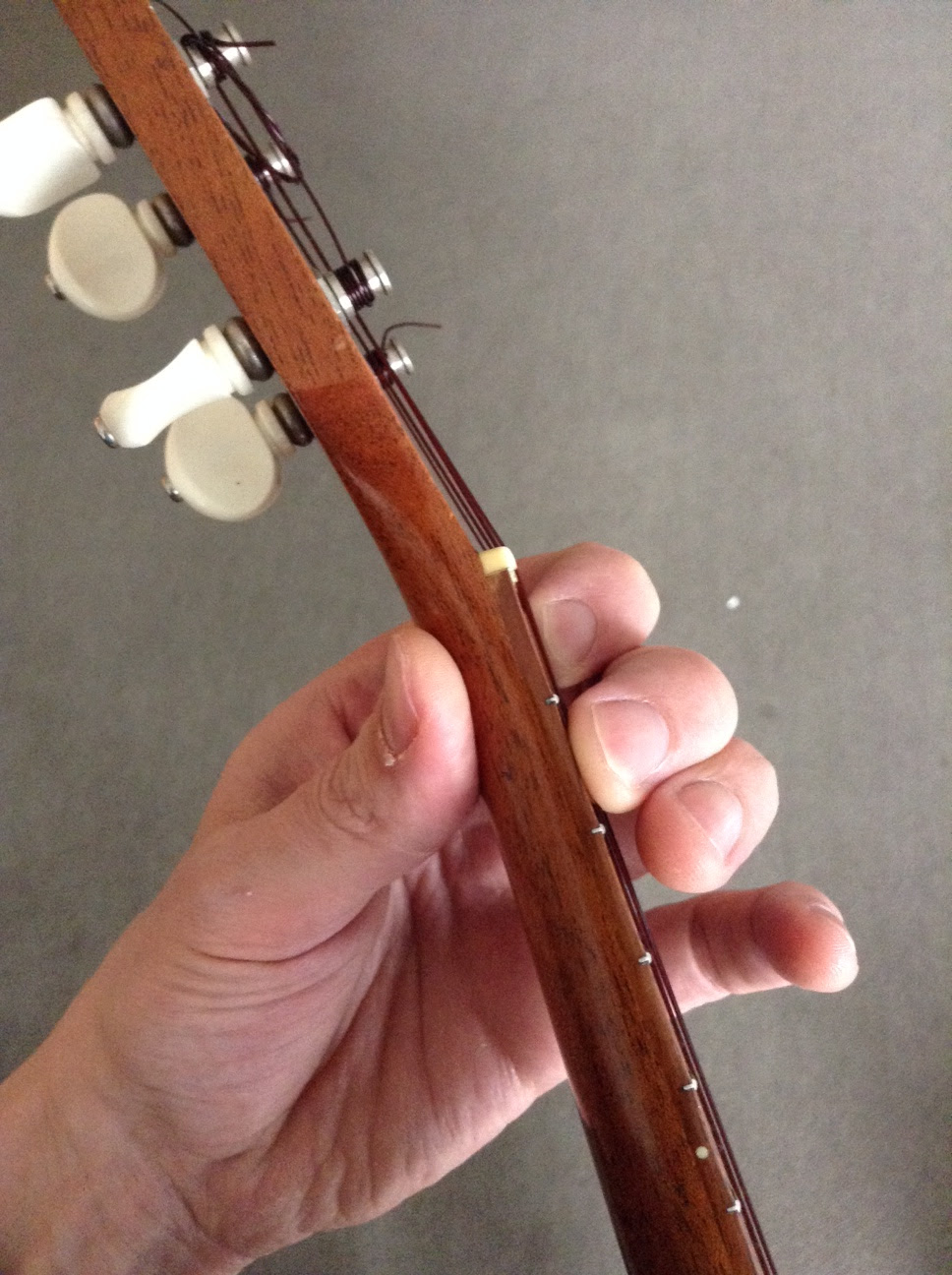 So, if you’ve never practiced playing without looking, give it a go! And, let me know how it goes.

Have You Ever Played This Game?

Here is a little game that we used to play as kids. I encountered it again in an Alexander Technique workshop by Yuzuru Katagiri in Japan. I think it shows very well how the visual sense can trump our other senses.

Recruit a friend and ask them to arrange their hands according to the instructions below. Gently! Please stop at any sign of discomfort in the wrists or arms:

1. Hold out both hands in front of you with your palms down.
2. Turn the palms so that they are facing away from each other, thumbs down, pinkies up.
3. Cross your wrists over each other and link your fingers.
4. Gently bring your linked hands down towards your chest and then up, so that your thumbs end up facing away from your body, and your pinkies toward your body. 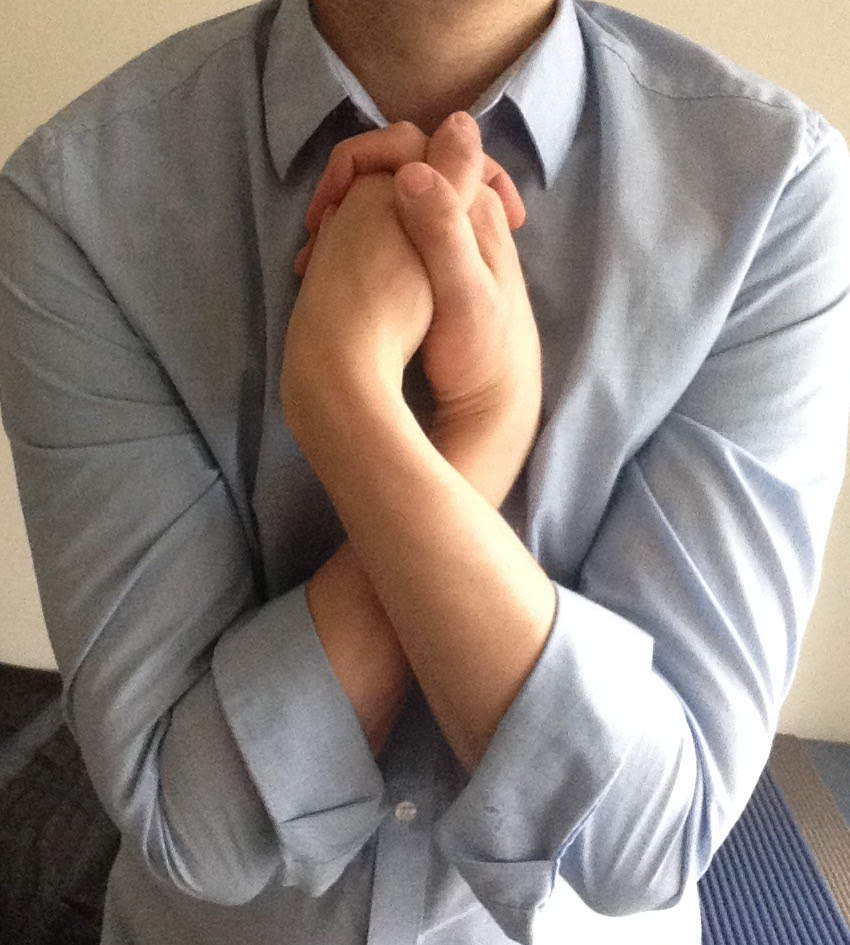 Now point at one of your friend’s fingers, without touching it. Say, “Move this finger.” Make sure you don’t touch the finger! See what happens. Chances are they will move the wrong finger. It might even take them a few tries until they can move the right one.

Now, have your friend close their eyes and ask them to move the index finger on their right hand. Or the pinky on the left hand, etc. Chances are that they will get it right on the first shot. Very interesting!

Okay. All for now!