Chord Weaving: Finger-picking Patterns (UD#73)
from Ukulele in the Dark
with Guido Heistek

Sometimes we want a different sound from strumming. Something perhaps a little more sparse, spacious, woven together. So, it can sometimes be nice to pick the notes of a chord one at a time, instead of strumming it. This is sometimes referred to as “playing broken chords.” The simplest way to do this is to fret a chord in your left hand and pick the notes one at a time with your right hand. Here is an example with a C chord. We pick one string at a time starting on the G string. Like this:

Try this with some of the different chords you know! Fret the chord and pick the strings one at a time starting with the G string. Nice, eh?

How does it work rhythmically?

Generally, when we use this kind of picking, we pick TWICE PER BEAT. Which means that if you are playing a song with 4 beats per bar, you will play 8 PICKS per bar.

In such a case, a bar of the C chord would make a pattern like this:

Try this simple approach to finger-picking on a song that you know! Try singing while accompanying yourself with this simple pattern. A challenge!

At first, it’s easiest to pick broken chords with our thumb, the same way we pick single notes. However, if we want to play the pattern at a very quick speed, it’s not possible to move the thumb fast enough from string to string. So, that is why, for finger-picking patterns, I tend to use ONE FINGER PER STRING in the picking hand:

Try this pattern using one finger per string. WARNING: At first, it may seem harder than just using the thumb but, in the long run, it will give you more speed. That’s the plan!

I have made a little video to talk a little more about finger-picking patterns. I introduce 5 patterns for songs with 4 beats and 3 beats per bar. Please have a look. The video is below. There are some juicy sounding patterns in there.

In the video, I use the chords from “Love Me Tender” to play the different patterns. Here are the chords to the song so you can follow along: 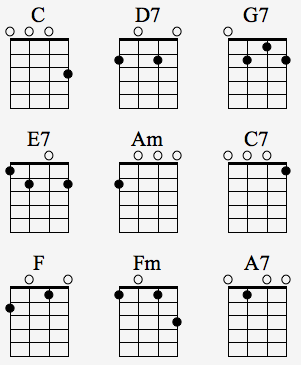 And I just had an idea! After we go through the chords for Love Me Tender in a finger-style pattern, let’s learn to play the song in a CHORD MELODY next lesson! It’s a plan.

Here are the 5 finger-style patterns that I look at in the video.

Here is the video!

I hope you enjoyed today’s lesson! See you in a couple of weeks to do a chord melody for “Love Me Tender”.